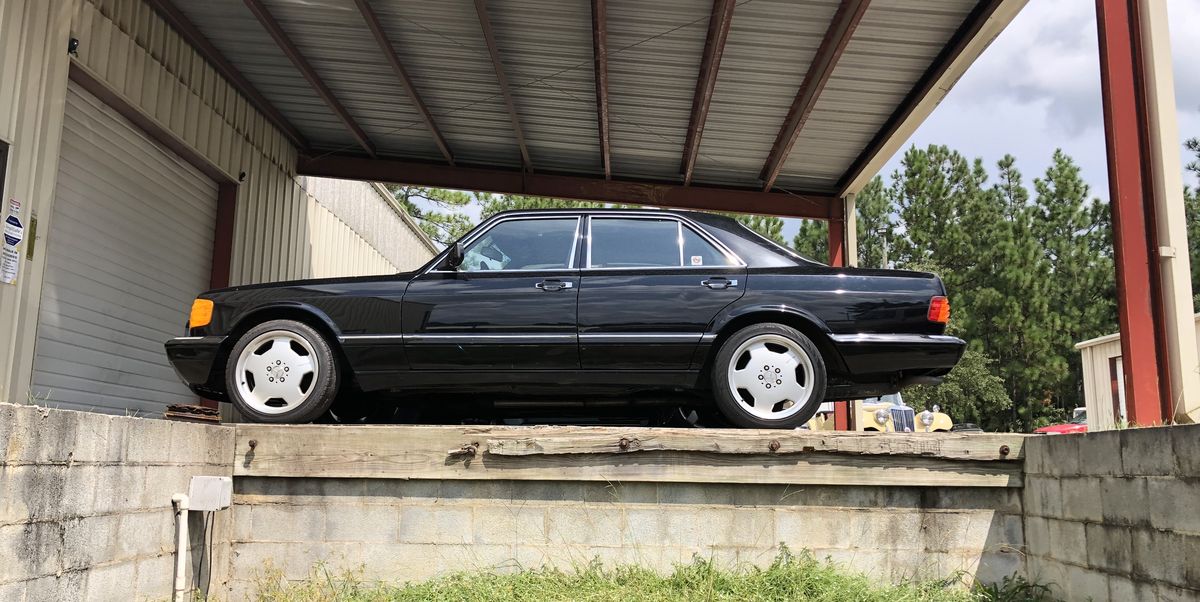 A $900 car isn’t necessarily bad, but a $900 S-class most certainly is. I knew that when I bought it, from a guy who loved it but couldn’t afford to tithe at the Church of Bruno Sacco. It had the looks, definitely—a 1990 300SE, its deep-black paint with a matching leather interior seemingly unscathed by 233,000 miles of travel, rolling on real AMG monoblocks, the 18-inch Belgian-made ones that came on the W210 E55. With its short wheelbase and blacked-out lower cladding, the three-figure 300 looked poised and purposeful, a proto-AMG in looks if not in substance. There was only one immediately evident problem, admittedly a big one: The engine sounded like it was filled with castanets and bocce balls. But better to face one big problem than a litany of smaller ones, or so I thought as I drove the 300 onto a trailer for the ride back to my driveway.

Where it proceeded to sit, for the better part of a year. I drove it down the street a couple of times, wincing at the knocks and clangs issuing from beneath the hood. I washed it and shined it up and marveled at its presentation. But I also began to catalog the other things that needed fixing, besides the engine. Because of course there were other things. Like, the driver’s-side seat wouldn’t move. The interior hood-release handle was broken, as was the power antenna on the left rear fender. One of the front tires kept going flat. And, ominously, the heater circuit was bypassed under the hood. Which meant that it probably needed either the monovalve (not too bad) or the heater core (certain doom, in that a W126 heater core is about as accessible as the Earth’s molten core).

Eventually, I decided to cut my losses by not incurring any in the first place. I’d grab some stock wheels and tires from a junkyard ($175), then sell the AMGs and the car separately. The wheels were probably worth the price of the car, so even at scrap prices I’d do okay. I listed the ol’ Benz for sale and immediately began hosting a parade of tire kickers in the driveway and lowballers online. But I knew somebody was going to buy it. What I didn’t guess is that the next dreamer would be my own mother. Apparently, unfounded optimism is hereditary.

I was on the phone with her a few days after I listed it, and I casually mentioned the Benz was for sale. “I want it! Take down the listing!” she said. I told her she really didn’t want it, that it would be a nightmare, that it needed an engine and that might just be the beginning. Basically, I argued that a $900 car would turn into a $4000 car right quick. “So?” she said. “It seems like $4000 isn’t bad for a car like that, if it’s running fine.” Damn. I kind of agreed with that.

I found a used M103 3.0-liter straight-six for $800, shipping included. Since engine swaps are beyond my pay grade, I sent it to a local shop, Euro Auto Service, to get its heart transplant. Euro’s owner, Dean Segovis, called a couple of weeks later to let me know that the new engine was installed and running . . . and had water in the oil, but hopefully that was just condensation and not the head gasket. The old engine looked like it had a patched-up hole in the oil pan, hinting at the cause of its demise. The car also had a cracked starter, so it got a new one of those and some other odds and ends that took the tab to $2500. That’s not the final bill, but that’s where we’re at in what’s hopefully the home stretch. So the $900 car is now a $4200 car, as I foretold.

That still seems like a good deal for a classic S-class, but I haven’t investigated the cost of seat modules or monovalves or any of the other small insults that accrue over 30 years. If I do, I’ll have to be the bearer of bad news to the Benz’s new owner. But it’s not like I didn’t warn her—there’s nothing more expensive than a cheap Mercedes. Except maybe a free boat.