The Complicated Legacy of the Mercedes-Benz W220 S-Class 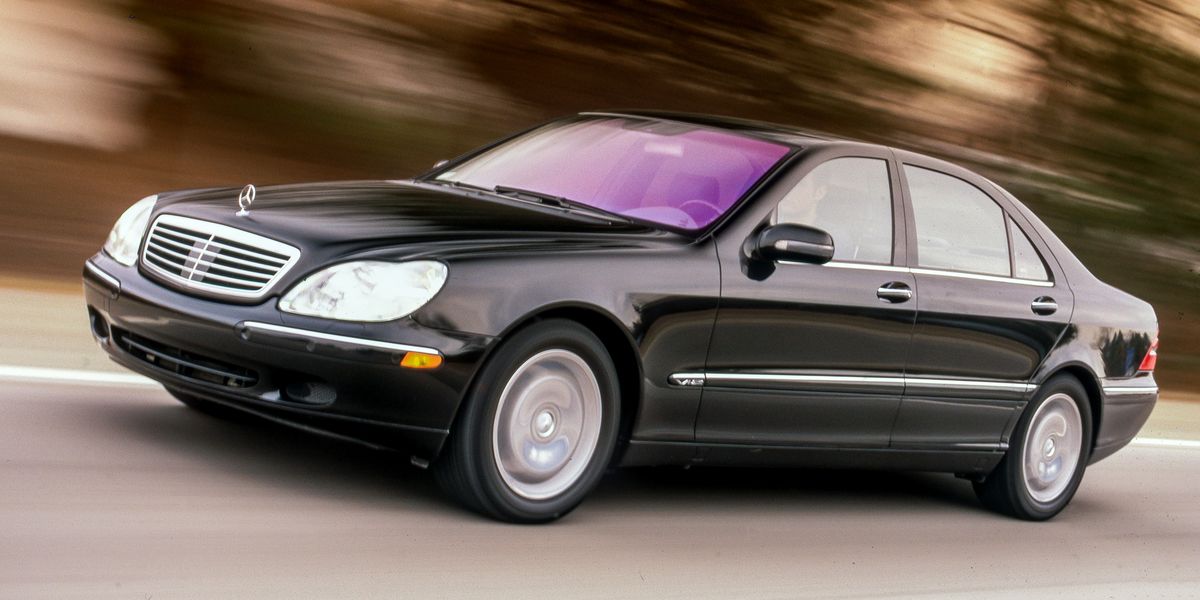 It couldn’t be easier to praise the Mercedes-Benz S-class. The feeling it imparts to owners and the cultural capital it commands are contained in its name: Sonderklasse. Special Class.

Decades of plaudits for one S-class after another make the W220 S-class, revealed at the 1998 Paris Motor Show and sold from 1998 to 2005, a special entry in the annals of special cars.

When we reviewed the new S500 for our May 1999 issue, we called its shape “emotional,” its interior “warm-blooded, approaching tropical in its sensuousness,” and said it “sets a benchmark” on the curving roads used for our 10Best selection. The technical highlights took one staffer nearly two hours to learn. At the end of our review, we asked, “Is this the world’s finest car?”

But the W220 was just as complicated as it was special, because all of its advances led to distressing consequences. Some decried the svelte styling as Mercedes giving in to fashion. (The W220 would have made more design sense following the W126 instead of the W140.) The advanced, sensuous interior design was let down by clearly inferior materials. And all those initially masterful electronics? They broke. A lot. The reason for that: The W220’s backstory was even more complicated than the car.

No S-class, even one that can drive itself and park itself, develops itself. It’d be hard to get a tormented and financially poorer W220 owner to agree, but the worst part of the W220 wasn’t a component, it was the cataclysms at Daimler and Mercedes-Benz throughout the 1990s. The German industrial bedrock heaved for a solid 12 years, and the cars cracked.

Six contextual threads braided themselves into a tasseled whip called the W220 S-class, seemingly designed to punish owners. (And the S-class wasn’t the only weapon of indulgent destruction. The 1996 W210 E-class was arguably worse, one of its foibles a diesel engine racked by an issue called Black Death.) Viewed in aggregate, one might be surprised the W220 didn’t come out worse.

Here’s what happened: In the late 1980s and early 1990s, Daimler-Benz CEO Edzard Reuter tried to turn Daimler into a global tech company through what the New York Times called an “acquisition spree, buying into aerospace, defense, electronics, rail systems, financial services, software, and household appliances.” Reuter wasn’t an engineer and didn’t jibe with Mercedes’s conservative, bank-vault engineering ethos. His interest in the car division was that it mined the money to pay for his run at an empire. A recession in the early 1990s helped end that run in 1995, the company awash in red ink.

Jürgen Schrempp took over. Often cast as a German version of General Electric CEO icon Jack Welch, one of Schrempp’s nicknames was Mr. Shareholder Value. In the 1996 Daimler annual report, Schrempp’s opening statement targeted raising Daimler-Benz’s operating margin to 12 percent. This would be done by increasing efficiency and cutting costs via efforts like internal competitiveness drives and Daimler’s embrace of Japan’s just-in-time manufacturing.

It worked. At the end of 1996, Daimler-Benz was profitable again. That profit grew the next year. In 1998, The Independent wrote Schrempp “would be remembered as the man who transformed the ill-focused German industrial company into one of Europe’s most profitable carmakers.”

As Schrempp pared fat, he also embarked on empire building. Whereas Reuter cobbled together disparate companies, Schrempp wanted to build the world’s largest automaker, a juggernaut he called Welt AG or World Inc. He incorporated Mercedes-Benz into Daimler in 1997, orchestrated the DaimlerChrysler “merger,” sealed in 1998, then took a controlling 37.7-percent stake in Mitsubishi and a 10.5-percent stake in Hyundai in 2000.

In 2007, a Mercedes executive confessed, “The flood of new products caused us a lot of problems.” According to Automotive News, suppliers at the time said Schrempp took Mercedes’s focus off engineering. Schrempp believed Mercedes cars cost too much to produce and sell because of “overengineering.” Daimler’s distractions ended up gutting basic engineering.

In 1995, when Daimler-Benz’s board approved the W220’s final design, however, no one knew that was happening.

The rise of the personal computer in the 1990s turned chip-based car technologies into a brand differentiator and profit center. In our review of the W140 S-class that preceded the W220, we wrote that the sedan’s body was “packed with hardware as densely as Maria Shriver’s husband is packed with muscle.” (That’d be Arnold Schwarzenegger, now her ex-husband.)

The W220 was at least one but perhaps four orders of magnitude beyond the W140 in terms of tech.

According to Taylor, that’s how Dieter Zetsche, then head of passenger-car engineering overseeing the W220, ended up with a brief for “better performance with lower fuel consumption, more interior room, increased safety, lighter weight, and a range of equipment that was as comprehensive as possible … [to] pioneer new technologies that would set it apart from rival contenders; and finally, it had to be cheaper to build, in line with the new corporate philosophy of the car division that was sweeping away many long-established practices at the time.”

Zetsche’s team delivered the first car in the world with keyless start and a radar-based cruise control, called Distronic. The W220 introduced the brand’s Cockpit Management and Data System, COMAND, with GPS navigation, updated Linguatronic voice-controlled phone and audio functions, and TeleAid. The sedan came with three owner’s manuals: one for the car, one for COMAND, and one for the phone system.

And its immediate technological superiority turned into components that broke with frightening and cascading regularity.

The Airmatic suspension pipework leaked, or its pump would break. When the Airmatic system goes, the car squats on its wheels like it’s trying not to poop itself. The ABC’s hydraulic pump would retire, or its pipes would leak, causing the sedan to lean permanently.

The soft-close doors would refuse to pull themselves closed due to a glitchy pneumatic actuator or yet another busted pump. The COMAND system module failed and needed replacement, audio-system issues were legion. The electronics drained the battery, and diagnosing the elusive draw reads like a bomb disposal guide. Forget about jumping the W220 with another car, because surges would fry the W220’s fiber-optic electrical system.

Of the crank-position sensor in the W220’s new family of V-6 and V-8 engines, one site says, “The W220 S-class will go through these quite happily” and refuse to start when the car is hot.

Even away from electronics, the W220 had issues. In 1993, Mercedes-Benz switched to water-based paint. For reasons that remain unclear, the steel didn’t get the treatment it needed, so early production models suffered severe rust issues, especially around the wheel wells.

The May 1999 Road & Track review of the S500 chided, “The interior of the new S-class is a blend of the highest of automotive technology and, alas, of heightened cost/benefit calculations. (Think of the S500’s $9650 price cut and think hard.)” When Car and Driver drove every generation of the S-class in 2018, we labeled our slide showcasing the interior, “Degraded Materials.”

A drain valve below the windscreen would get blocked with dirt, leaves, or snow. Water would run off the blockage into the bulkhead, then into the passenger footwells, where it shorted the floor-mounted Signal Acquisition Module (SAM)and fuse box. One of Mercedes’s recommended fixes was to cut a second drainage hole with a drill and body saw. Yeah. Drill and saw a hole. In a Mercedes. As instructed by Mercedes.

As many owners discovered, there was so much more that could, and did, go wrong. Schrempp would blame “complex electronics systems installed without being properly understood.” He was talking about the E-class, but the S-class had a similar appetite for destruction. Consumer Reports classified the W220 model’s reliability as “poor,” anointing it one of the “least reliable luxury cars.”

A facelift in 2002 fixed many common issues. Five years later, “Hubbert revealed that in its push to solve some of its high-tech problems, Mercedes disabled or removed hundreds of electronic features and functions from high-end products like the S-class. Apparently, nobody noticed. And if they did, it was only because the vehicles started to work better.”

The 2003 to 2005 models are recommended for those who must sample the W220. Necessary research includes the W220 Encyclopedia, compiled over the years by enthusiasts for window shoppers. It’s 13 single-spaced pages of links to fixes.

The issues bred in the 1990s would haunt Daimler for years. In 1990, Mercedes-Benz came first in the J.D. Power & Associates Vehicle Dependability Study. In 2003, the company was 27th, behind Jaguar and Plymouth, over issues like “handling, braking, shocks and struts, electronic window controls, and inaccurate fuel gauges.” Who was number one that year? Lexus.

Looking back, the W220 is a good example of what Deepak Chopra meant when he said, “All great changes are preceded by chaos.” For all its missteps, the sedan and its two-door sibling introduced five of the technical brand pillars Mercedes boasts about today and will boast about tomorrow: COMAND navigation, Pre-Safe, Distronic, Airmatic, and Active Body Control.

We don’t imagine such chaos at the top of the line happening again soon. S-class models since the W220 reestablished the model’s rectitude, and the 2021 W223 S-class that debuts Wednesday—a supercomputer that thinks it’s a limousine, from the sounds of it—was developed mostly on Dieter Zetsche’s watch. He understood the complications of the W220. And if he imparted any wisdom before retiring, it was likely this one word: focus.