After endless leaks and the company’s own teasing, Samsung has officially unveiled the Galaxy Z Fold2 at its “Unpacked Part 2” event today. The successor to last year’s Galaxy Fold packs plenty of improvements over the revamped and re-released original, including a more durable design, a folding glass and polymer display, a faster chipset, and bigger screens both inside and out. Those hoping to jump into foldables with this new generation will need to double-check their savings accounts, though, as the Z Fold2 comes in a wallet-destroying $1,999, with pre-orders opening tomorrow at 12:01 AM on September 2nd ahead of general availability on September 18th.

When it comes to non-folding parts, specs agree with Max Weinbach’s prior leaks. You get the latest Snapdragon 865+ chipset — and that’s worldwide; there won’t be an Exynos model. That comes with 12GB of RAM and 256GB of storage, which is a bit less space than last year’s 512GB Galaxy Fold. It also has a slightly larger 4,500mAh battery and slightly different triple-camera setup. The Z Fold2 is “fully” 5G-compatible with both mmWave and sub-6 standalone and non-standalone networks.

The two screens are where things have really improved, though. Samsung has upped the resolution and size for the interior folding display, switching to a much smaller pinhole-style camera while also pumping performance up to 120Hz. The lone fly in the ointment is that, like the Note20 and Galaxy S20 series, you can’t have both native resolution and 120Hz together. You have to choose one or the other, and 120Hz only works at a “full HD” resolution.

The new folding screen will also be more durable, as Samsung has switched to a layered glass and polymer structure, like the recent Z Flip and Z Flip 5G. The hinge has also been made more durable by inheriting other Z Flip tweaks, including a beefy CAM mechanism and dust sweeper built into the hideaway hinge. If somehow you do damage it, Samsung is offering one-time replacements for $149, the same as last time. 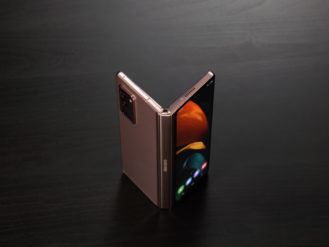 The front “cover display” has also been upgraded. While it’s only 60Hz, it’s significantly larger and higher-resolution than it was last time around, sporting a similar hole punch-style front-facing camera — counting the folding screen, you get two of those. It’s also topped by that snazzy new Victus glass, though the back is Gorilla Glass 6.

Stepping beyond just hardware, there are also some software perks that the big-screen device can take advantage of in the latest version of OneUI 2.5, like the ability to run three apps at once, drag and drop support between compatible apps, and Flex Mode features like the Z Flip to take advantage of hinge positioning that work in apps like Duo and YouTube. There’s also an auto-framing feature for the camera that lets you set the phone down so it can track the subject, a dual preview feature that shows the frame on both interior and exterior displays, and a rear selfie mode using the primary cameras and cover display, plus some of the other new “pro” camera features from the Note20 line.

There are other perks to Z Fold2 ownership than just the phone, though. As with the Z Flip and Z Flip 5G, they also come with so-called Galaxy Z Premiere Service, which gets on you on-demand concierge support if you run into issues (i.e., real people on the phone, not an automated hotline), plus a Founders Card membership, a prepared meal from a Michelin-starred restaurant (we’re told that may end up being a meal kit or delivery), and a FairwayPass Elite membership that gets you a complimentary round of golf and comped green and cart fees at a handful of participating clubs. 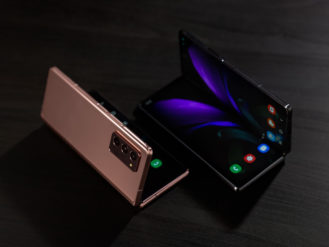 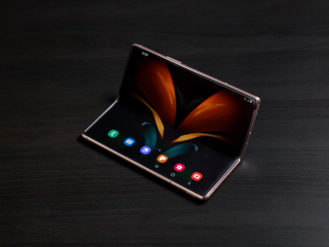 Pre-orders for the Z Flip2 start tonight and tomorrow at 12:01 AM ET on September 2nd, with formal availability set for September 18th. We’re told that all the major US carriers (AT&T, T-Mobile, and Verizon) will all have the Z Fold2, though it will also be sold unlocked directly from Samsung. Trade-in offers are also available. Z Flip and OG Galaxy Fold owners can get up to $800 in credit for the new model, and Samsung is also offering up to $650 in credit for other phones. Pricing runs just shy of two grand, and it’s available in two primary colors: Mystic Bronze and Mystic Black. You can further jazz it up with a custom hinge color in Metallic Silver, Metallic Gold, Metallic Red, or Metallic Blue. Samsung Care+ warranty and accidental damage protection is also available.

There’s also a Thome Browne special edition that comes with a host of extras, including a Galaxy Watch 3, Buds Live, and a case, for $3299, though it won’t be available until later on September 25th.

For more information, look forward to our upcoming review.