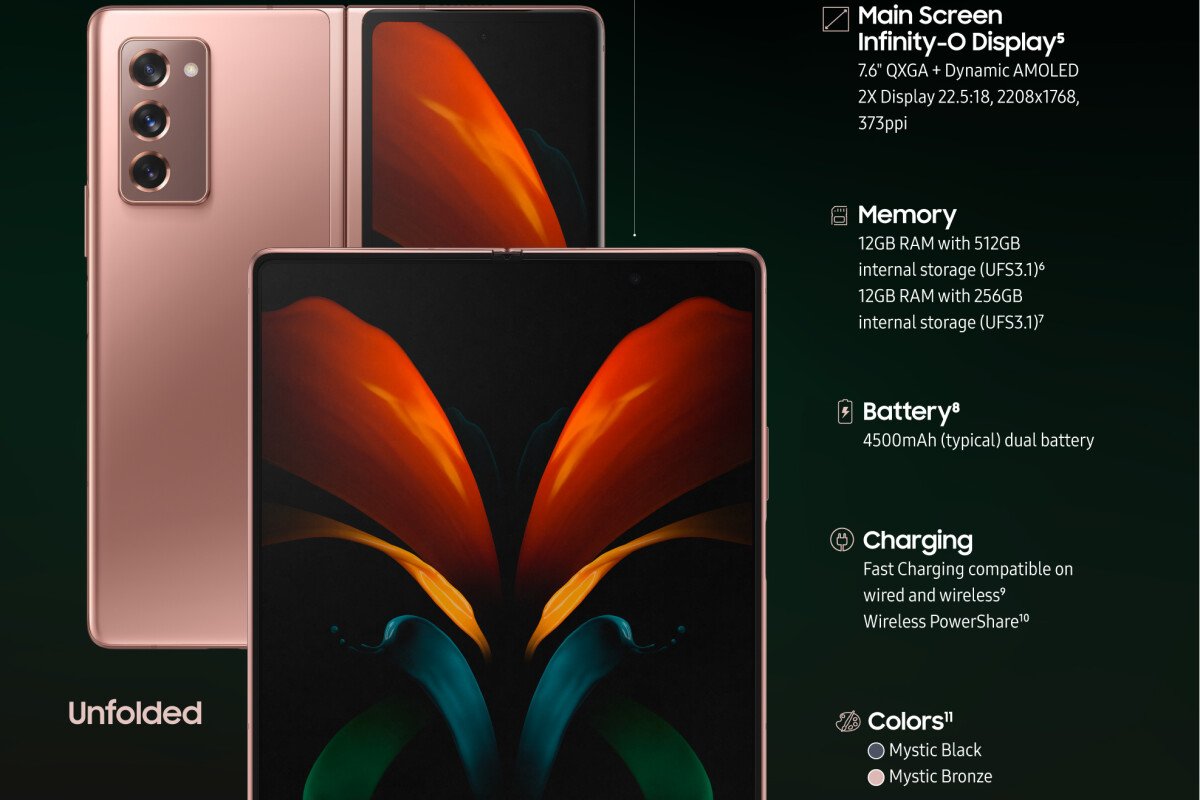 The naming immediately takes Samsung’s second vertical folder out of the OG Fold camp, and puts it in one series with the Galaxy Z Flip despite the drastic design differences – after all, the Flip is a horizontally folding clamshell, while the OG Fold and the Z Fold 2 bend over a vertical line in the middle of the display. Are there other differences? You bet.

So far, the best foldable phone title belonged to Huawei’s “out-folding” Mate Xs, precisely because of its screen being on the outside. A big 6″+ phone when closed, a veritable 8″ tablet when opened – that’s what foldable phones were supposed to bring, and Huawei still managed to keep things relatively thin and small.

In contrast, the OG Fold has a puny 4.6″ HD display on the outside which is only good for answering a call or checking the weather. The Galaxy Z Fold 2, however, with just a few of its new features, rights all the OG Fold’s wrongs, and continues to become the best foldable phone in the process, when it comes to specs and usability.

First off, the Z Fold 2 sports a way larger, 6.23-inch external display with much thinner bezels than on the Fold. That big external 6.23″ display makes Galaxy Z Fold 2 usable when closed, too.

The sheer diagonal growth of the external screen – from the pathetic 4.6″ to 6.23″ – adds incomparable amount of value to the Galaxy Z Fold 2. With just this (admittedly belated) move, Samsung increases the usability of the Fold 2 to the nine, as no longer would its owners have to use the hinge and open the screen every time they need to do something more than a quick notification/weather/time check.

Need a larger screen for a long reading session, working on docs side by side, playing games, or simply watching videos? Just then you can pop open the screen, like the way it already is on the Mate Xs foldable phone.

Second, the new Hideaway Hinge mechanism has now been greatly improved, and it also allows the Z Fold 2 to enter several “Flex” modes, including a tent one like on the Surface Duo:

The Galaxy Z Fold2 is re-engineered with a sleek, unified design that delivers a smooth, high-end feel. Samsung Ultra Thin Glass is now on the Main Screen, providing a more premium and refined feel for the display. Its design is anchored by the Hideaway Hinge, which fits seamlessly into the device body with the CAM mechanism and enables free standing capabilities that power all new Flex mode experiences. The internal display with Ultra-thin Glass (UTG) cover clocks at 7.6-inches compared to the 7.3-inches found on the original unit, and carries a 120Hz refresh rate that is on top of that adaptive like on the Note 20 Ultra. The OG Fold’s hideous notch has been cast away, too, and we now have an Infinity-O punch-hole design on both the Z Fold 2’s displays.

We recently sat down for an interview with Pixelworks, the folks that are behind some of the most remarkable advancements in mobile display technology of late – namely dynamic refresh and video frame rates, as well as individual post-production screen calibration. When we asked them will those come to foldable phones, here’s their answer:

PhoneArena: Will dynamic 120Hz, MEMC and the other unique features be possible with foldable displays like on the Galaxy Fold or the Huawei Mate Xs, too?

Sr. Director Vikas Dhurka: From a capability point of view, the technologies that we provide are agnostic to the screen size and the mechanical design of the display. With the Pixelworks processor, any display could have a visual experience that is far superior than anything else that’s out there.

There you had it, nothing prevents manufacturers from employing high refresh rate screens on foldables, and the Galaxy Z Fold 2 is actually the first bendy device to have 120Hz refresh rate display. It may still not be at the full resolution, like what others are offering, but it will bring smoother scrolling, animations, and more pleasant reading and gaming sessions to your Galaxy Z Fold 2.