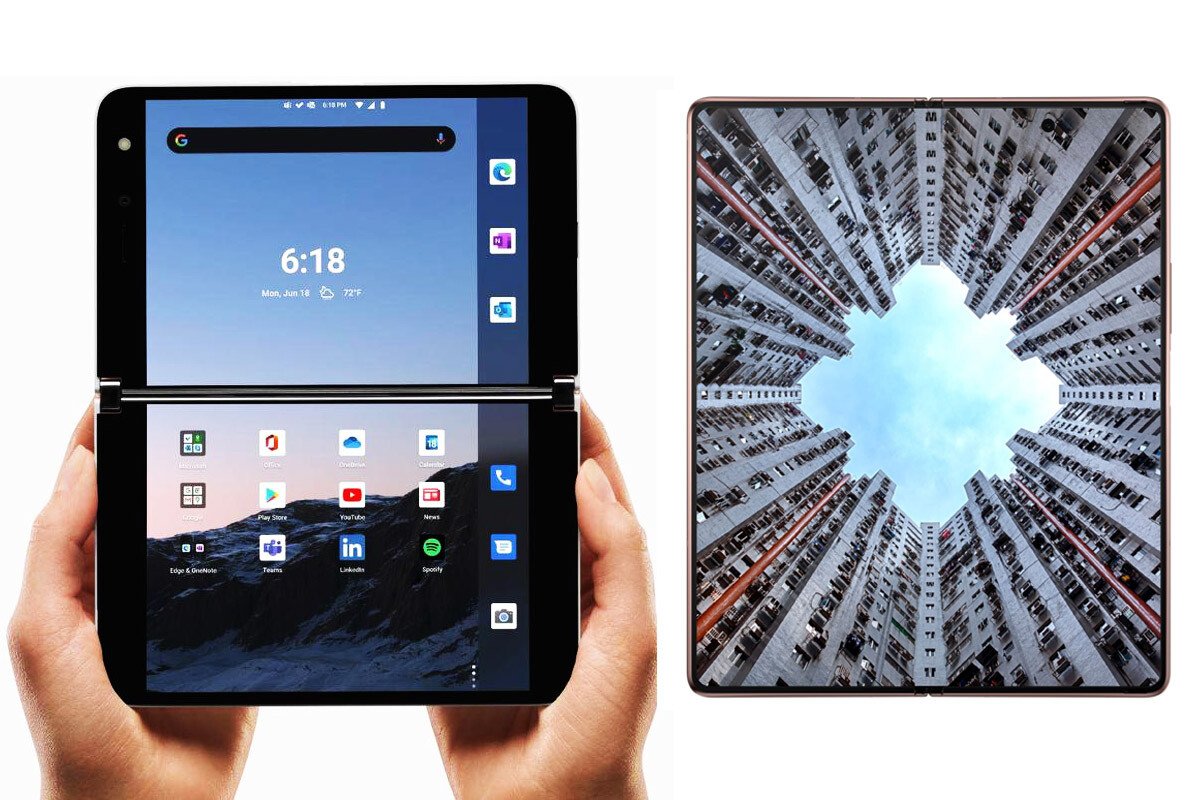 Microsoft just sent out its Surface Duo review and demo units to tech reviewers, Best Buy and AT&T stores, and is gearing up for the grand September 10 release. The thinnest foldable device out there has two 5.6″ display that combine to form one big 8.1-incher when you open it – well, if you are not counting the thin gap set by the hinge in the middle, of course.

That’s not a new concept, as LG has been making its Dual Screen accessory for a while now, and even the new LG Velvet can be had with one to serve a very similar purpose for about half the price of the Duo.
Since it’s Microsoft, however, the Surface Duo price is very high, and it needs to be compared to “foldables” in its own ballpark, of which we can only think about the upcoming Galaxy Z Fold 2.

First off, the Microsoft Duo is a faux “in-folder,” as its screen doesn’t bend, but it has a tiny hinge gap between two screen halves. Much easier to pull off than bendable OLED display with ultrathin cover glass that flexes when closed.

Second, while its double-door design prevents the infamous crease or bump in the middle of foldable display phones, there is also no way to watch a video or scroll a web page uninterrupted by a black border in the middle, even if there is a way to stretch the content over both displays. That’s arguably more annoying than the Fold’s crease that you soon forget is there, as there is content shown at its place, too.

Don’t even start us on the lack of big external screen on the Microsoft Surface Duo, as our own experience with foldable phones has shown that you need to open the darned thing hundreds of times a day still. You can, of course, rotate the hinge 360, and keep it with the displays on the outside but then you shouldn’t keep anything in the pocket you keep the Duo. Did we say pockets? This thing is 93mm, against 68 mm (2.7 in) of the Z Fold 2 when closed, and that’s the real pocket and handling nuisance.

Granted, the Duo’s hinge is very sophisticated, as you can expect from the Surface line makers, and the phone is very thin, light, and compact for a double-door design but the wide footprint, and the need to carry it with the displays facing outward, takes the design round in Samsung’s camp. Well, at least the Duo is slightly lighter.

Pitted against the Galaxy Z Fold 2 specs and feature upgrades from the OG Galaxy Fold:
The Duo is definitely coming out of 2019 here, not 2020, when compared to the Galaxy Z Fold 2 which has a 6.2″ external and 7.7″ internal displays, 12GB/256GB memory, Snapdragon 865+ processor, a triple camera with 12MP telephoto, ultrawide and big-pixel main units, not to mention the 4500mAh battery, and fast 25W charging.

It’s all downhill for the Surface Duo here, and even the fact that it can use its single camera for both selfie and rear shots, doesn’t make up for the lack in specifications when compared to Samsung’s latest and greatest.

The Microsoft Surface Duo is certainly an intriguing device that has the dual-screen format elevated to perfection, if we don’t count the wide body, but its specs are so lacking in comparison with the Galaxy Z Fold 2, that a few Benjamins more for a real foldable display in a way more powerful and ergonomic phone seem like a bargain in the fledgling foldable phone market.