Gordon Murray Spills Details on 700+-HP T.50S for the Track Only 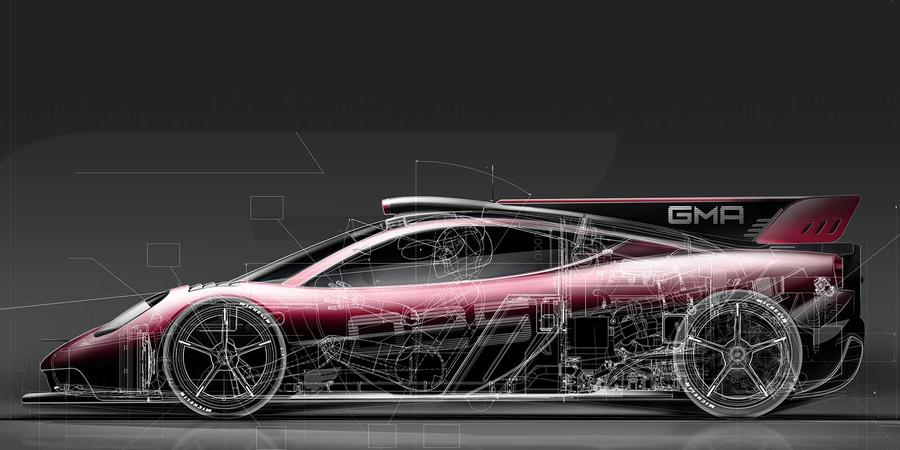 Many jaws dropped when Gordon Murray revealed the final specification for his McLaren F1–inspired T.50 last month. But some, it seems, did not drop far enough: how else to explain the even more outlandish numbers of the track-only version that is set to follow it, and which is currently being developed under the logical code name of T.50S.

Gordon Murray Automotive has released this sketch of the car along with one number that, on first encounter, seem to be impossible. No longer requiring to meet road legality has allowed Murray’s team to push every boundary further, so the T.50S will be 220 pounds lighter than the already super-svelte T.50: just 1962 pounds, according to the company’s numbers—and will also have an even more potent naturally aspirated Cosworth V-12, one that now makes up to 730 horsepower thanks to internal changes and a ram air intake.

But those figures are just appetizers for the real highlight. The T.50S’s combination of active and passive aerodynamics mean it will be able to generate up to 3300 pounds of downforce. Murray’s team has even worked out the exact speed at which the new car will create enough negative lift to overcome the mass of itself, its fluids and a driver: 175 mph, at which point it is making 2315 pounds.

When we spoke to Murray about the new car, the first surprise was that it could actually make more than that. “We actually had it developing 1900 kg [4190 pounds] at maximum speed,” he told C/D, “but with the tire sizes we could fit to the car we couldn’t support that, so we’ve backed it back down.”

The T.50S still uses the fan-assisted diffuser of its roadgoing sister, with a 48-volt motor turning a 15.7-inch-diameter blade. But it also gains a sizeble delta-shaped front wing, one you can’t see in the side-on sketch that has been released, but which Murray says bears a strong resemblance to the shovel-shaped wing worn by the 1983 BT52 Formula 1 car he also designed. The car also has a longitudinal fin running down its spine, similar to the ones often sported by LMP1 racers, which will improve high-speed stability.

While the regular T.50’s electric fan runs at different speeds to produce varying amounts of downforce, Murray says the new car’s will be flat out all the time, running at a busy 7000 rpm. A Formula 1–style DRS system to boost top speed wasn’t judged worthwhile, since the car will be able to hit 210 mph even while towing its full aero load.

Losing 220 pounds of mass has required the loss of the road car’s air conditioning, as well as almost all internal trim. The central seating position stays, but the T.50S loses one of the flanking passenger seats; there will only be room for a single brave pillion on the left. It also does without the road car’s manual gearshift, as the transmission has been swapped to a more track-friendly six-speed competition-grade X-Track IGS gearbox.

The T.50’s Cosworth-developed naturally aspirated V-12 will also be substantially modified with redesigned cylinder heads and camshafts, a higher compression ratio, a new intake manifold, and an exhaust system that doesn’t require catalysts or much in the way of noise insulation. The S will produce a peak of 700 horsepower, which can be boosted to 730 horsepower by the ram-air effect from its high-level intake when running at speed. Peak power arrives slightly higher up the rev band than in the road car, but both versions have the same 12,100-rpm limiter.

All 100 of the roadgoing T.50 have now been sold, and Murray says that more than 15 of the T.50S cars have also been allocated to buyers—before the car has even been seen, and despite a price that’s the equivalent of $4.2 million before taxes. That’s a huge amount to pay for a car that can’t even be driven on the road, but plans are already in the works to help owners go racing.

Murray initially hoped the car would be able to compete in the Hypercar class that the FIA and the ACO, which organizes Le Mans, were proposing, but that idea now seems moribund.

“So I’ve been talking to Stéphane Ratel of SRO instead,” Murray says, “which is probably more pertinent because he runs about 90 percent of the world’s GT championships. He’s working on an idea called the GT1 Club where people who have these sort of cars could end up racing them. That’s what we’d love to do.”

Who wouldn’t love to see the GMA T.50S battling with the Adrian Newey–designed Aston Martin Valkyrie AMR Pro, with enthusiastic amateurs at the wheel of each?

Murray admits that racing with other cars would likely require balance-of-power equalization to ensure fairness.

“To be absolutely blunt, the numbers on the T.50S are quite ridiculous—890 kilograms, a ton and a half of downforce, and 700 horsepower,” he says, “so it would need some kind of balance of performance, because otherwise we’d win everything.”

Murray also says that the T.50S is a much more serious project than the McLaren F1 LM he also led the construction of.

“It’s not just another version of the T.50,” he says. “It was conceived at the same time to be different. It’s very much its own motorcar and it has been like designing a racing car, not a conversion.

“The McLaren F1 LM we built to celebrate winning Le Mans was basically a road car with a fire extinguisher and a wing on the back. This is a much more serious car and has been right from the beginning.”

One thing that is still missing is the new car’s final title: T.50S is just internal code. We’re promised a “historically significant official name” when the finished car is shown later this year. In the spirit of Enzo and Senna, how about the Gordon?